You know what's over? 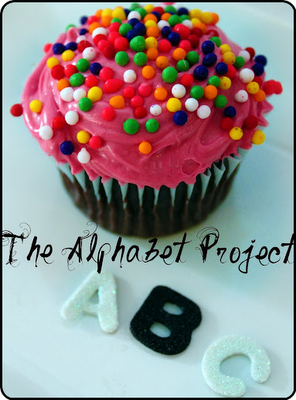 Ha! I am beaming. You can't see me because that's the internet for you but, I am a glow stick right now. So freaking amped I don't have to deal with the cupcakes I once deemed clever and cute that I came to see as sloppy and stressful ever again!

Until I decide it's a good idea to take on some OTHER idiotic baking challenge but, hopefully I will be able to stick to a time table if I ever do something stupid like that again and you guys will get the posts within the planned month or so instead of slowly, painfully, over a year and a half, and through a huge chapter in my life. 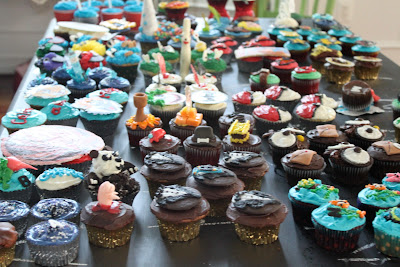 A freaking amazingly huge chapter in my life.

It is so strange to see all the cupcake posts on my blog. I think what came to be my frustration with them was that I can't even connect to the human I was at the time of baking. I had a long weekend for some reason back in the fall of 2011 and decided to make an alphabets worth of cupcakes.

I made 3 flavors (vanilla, chocolate, and red velvet) that spanned over 135 cupcakes and over 50 hand made/iced decorations in 3 days. I then spent the next 3 days photographing them all after work.

Ha, my roommates tolerated not just the sugary smell of cupcakes and icing that infused our entire first floor for a week but also the take over of our entire dining room table. And yeah. Roommates. Because that's where I was and who I was when I started this. Single female living in DC with 6 other humans.

Come a long way since then... dated Esquire, got engaged, new job, mom diagnosed with cancer, whirlwind wedding planning, move across the country, buying a house, Esquire taking the bar exam, Esquire passing the bar exam (!woot!), and then, right! This entire fairytale day was two weeks ago...

Gotta say, my wedding rocked, guys. After all the work and stress was said and done, my wedding rocked hard. And I love my husband so much and I am so excited about everything that has happened and is happening for us because, while the trip here may not have been the easiest one we could have chosen... now that it's over, now that we put in all the leg work and took all the stress in one big gulp, we are just married, living in our house, and taking it a day at a time.

One lovely, fall, low key day at a time.

Which, again, makes it hard for me to connect to this past person who was living a life comparable to "Real World" and elbow deep in icing in 2011.

While the content of the blog hasn't changed in literal years, I have. I have changed a LOT. 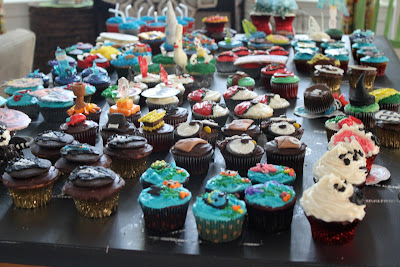 I am not going to say gone are the sugar highs or geek references. However, I will say that I tend to be a more rustic, flavor over beauty kind of cook these days.

I won't lie and say alcohol will stop appearing on my blog. I am just saying, these recipes may be for some fancy schmancy cocktails instead of jello shots, jungle juice, and anything containing "Nattie Light".

I am hoping these things are all improvements. I am hoping that the slightly more grown up me is still fun and colorful enough for this blog because I know I enjoy this page, you readers, and cooking more and more every single day I am involved with it.

Ha, even when I bite off more than I can chew (again, literally) and make 100s of pop referencing cupcakes. 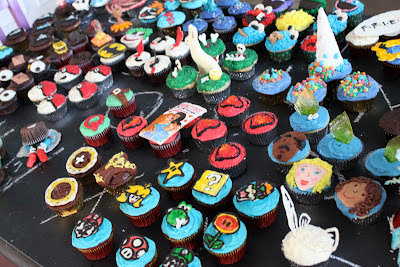 Thank you guys for all sticking through this transition with me! And for enjoying the alphabet project much more than I did toward the end there. Ha. They do have a certain amount of charm and playfulness that I still enjoy. You guys have reminded me of that.

P.S. In case you were wondering what happened with the 130+ stale cupcakes when the week of icing was over... don't worry! No cupcakes were wasted. The toppings however, got sliced off and trashed. I then used the cake bases to make a cupcake bread pudding that was pretty much awesome. I don't think I ended up taking pictures (grand intentions) or maybe I did but it was so long ago, I have no idea where those files are (ha, woops...). Either way though, the many many cupcakes were devoured in the end by my many many friends. Just... not as cupcakes but as bread pudding with chocolate chips and salted caramel sauce.