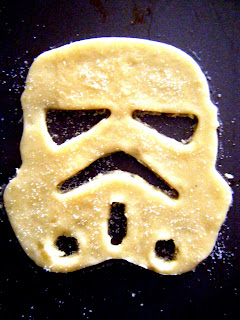 The force is very strong with this cooking blog as of late. Or at least the Dark Side. It's unlikely any of the drone-like Storm Troopers were in touch with the Force or their inner powers. Or emotions for that matter. 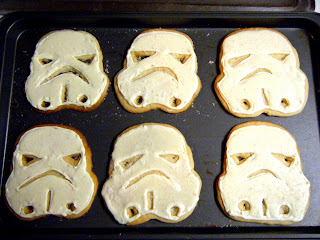 SO! Anyway. I made storm trooper sugar cookies. They tasted phenomenal and I got rave reviews- and not just because of the shape! The sugary/salty flavors worked in such lovely harmony, even though these cookies were rather large- everyone wanted one and would polish theirs off.
I think the cookies kind of spread too much (you can see freshly cut dough as the first image) but, that's how the recipe called for them to be made and I am unsure of a recipe that tastes better then this one. I rolled mine extremely thin- almost see thru by the last batch- to get them to stay in more clean lines but, still, they became more blended. Which kind of made them look like frogs to me... Anyone else see that? 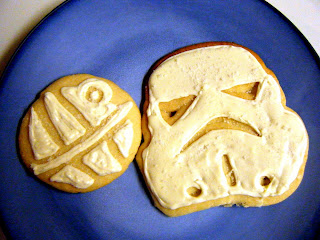 Just me then? Okay. Here's one platted up with an attemped Death Star. Sadly, the Death Star looks more like a droid from the film- (remember the one with spidery legs and a red lazer that tries to kill them at the start? That one.)- but still! Everything tasted great :)
May the force be with you!
Butter Sugar Cookies:
Ingredients:
-1 cup butter
-1 cup sugar
-1 egg
-2 1/2 cups flour
-2 tbls orange juice
-1 tbls vanilla
-1 teaspoon baking powder
Combine butter, sugar, and egg in a large bowl. Beat until creamy. Add flour, juice, vanilla, and baking powder. Beat until well mixed.
Divide dough into thirds: wrap in plastic food wrap, refrigerate until firm (2 hours or overnight).
Heat oven to 400, roll out dough on lightly floured surface, one third at a time, to desired thickness. Cut with cookie cutters, place onto ungreased cookie sheets and bake for 6-10 mins or until golden.
To Make them Storm Trooper Salted Awesomeness:
First cut into the shape of storm troopers! Very important. To make them slightly salty to balance out all that sweetness- you want to:
-Sprinkle Dough before baking with a mixture equal parts sugar and salt
IF icing them as I did, I wanted a SUPER sweet icing so, went canned:
-1 can vanilla Icing
-1 splash (1/2 teaspoon or more to taste) coconut flavor
-Sprinkle AGAIN once you apply the icing to make sure the ultra sugary icing is balanced with the saltiness :)
Enjoy!
Posted by Meg Luby at 3:00 AM