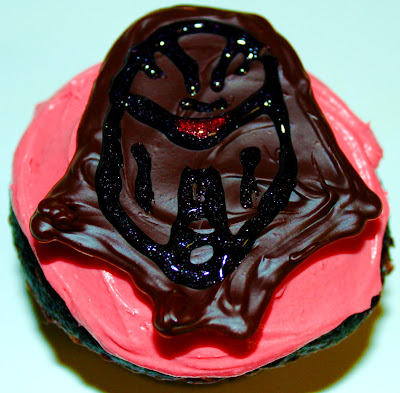 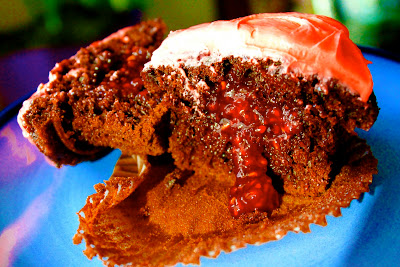 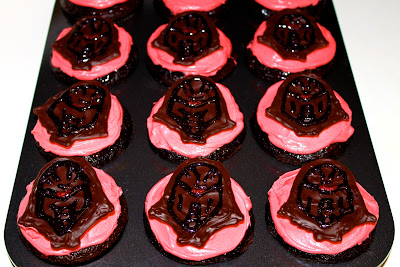 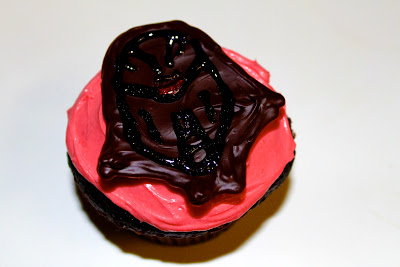 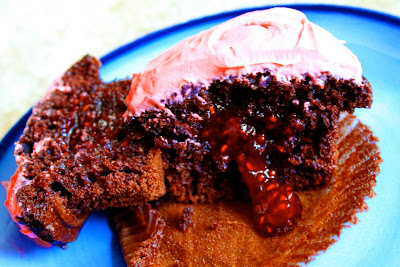 Okay, so. For those of you who are not nerds. These cupcakes are called "Bleeding Cylon Cupcakes" because, in the show, Cylons are robots that have been engineered and evolved to such an exquiste degree that, they bleed when cut open.
These chocolate raspberry cupcakes also bleed when they are cut open.
Even without the chocolate Cylon, these cupcakes are chocolate raspberry delicious. The simple recipe and yum factor are both a win.
Hope you enjoy my recipe! With or without the geekiness :) 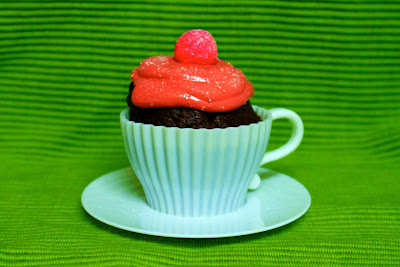 Bleeding Cupcakes
-1 box cake mix
-1 jar raspberry preserves
-Enough vanilla butter cream to cover a dozen cupcakes, recipe below if you don't have one. But a can from the store will do in a pinch :)
Make the cake according to the boxes directions. Once baked/cooled, cut a portion of the top out, slice out some of the inside of the cupcake, and fill with jam. Generously. Place the top back on. In microwave, melt about 1 tbsp of jam until the consistency of a raspberry syrup. Brush over the tops of the cupcakes, sealing the cut out tops in place. Place in fridge for 30 mins- 1 hr.
Add some raspberry jam to your icing to flavor it with a slight raspberry taste and some pretty seeds. I also added some bright food color for a proper "Cylon pink guts" color but, that's unnecessary, just fun. When cupcakes are set, remove from fridge and frost with icing. Top with nerdy chocolate Cylon if you so desire. Serve and enjoy :)
To make some Cylons: melt chocolate chips in a ziploc in your microwave. When melted, cut off the tip of the ziploc, pipe onto wax paper in the shape of the Cylon's helmet. Using gel frostings (I got metallic ones at the store) pipe the specifics of the helmet, including the red sensor beam.
Very important, ha.
To make butter cream icing:
-1 package powdered sugar (16 ounces)
-1/2 cup butter, softened (1 stick)
-3 tablespoons milk
-2 teaspoons vanilla
Beat sugar, butter, milk and vanilla with electric mixer at low speed until well blended and smooth. If frosting becomes too thick, beat in additional milk by teaspoonfuls until the frosting is of spreading consistency.