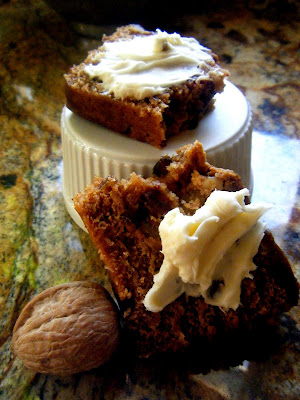 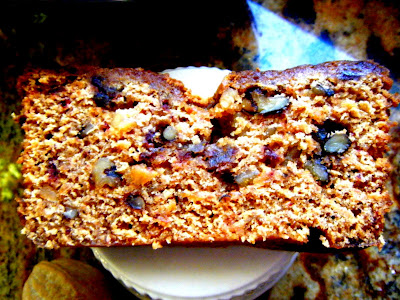 Get it?! "Date" nut bread? Like on a date? Or going on dates? Or the fruit, dates?! It's applicable for valentines day because, it's got date in the title and is a super comfort food that single people of the world would rather have then any frilly chocolates anyway. So there!


Hah, this is my 100th post on Clutzy Cooking! Clearly, off to a great start there with my crazy coming full out.

Anyway. This recipe was adored by my Grandpa Moylan. My dad is also rather obsessed with this recipe and, when my grandpa passed away and my family stopped making it, he waited for the years to pass until he thought it'd be "okay" for him to ask for my mom to make it for him.
Eventually, this bread became legend. This infamously delicious, dense, bread that we USED to have but, that passed away with my grandfather, never to be seen again.
Once it became legendary, we couldn't make it for him. It was too big of a deal! Too much pressure. If you made it and it wasn't as he remembered it, now a decade later, it would probably fall short of the infamous recipe he recalled.
Then last Thanksgiving, my Aunt Maureen made a batch and brought it to our house for the holiday. My dad lit up like a Christmas tree and had slice after slice. It was apparently all he remembered and more.
So! I had to make it myself. It's rather intricate but, it's simple flavors are a hit with everyone who tries it. Well worth the effort. You can make anyone who claims to hate dates a HUGE fan.
FYI: This is an extremely moist, dense bread, and I think I always end up cooking it a bit longer than I thought I would. As I mentioned, there are a lot of steps, but they are necessary evils for this to come out perfectly.
Plus, it's still a cinch. Make and enjoy! And once again, Happy Valentines :)
Grandma's date nut bread:
8 oz package chopped dates
1 tsp. baking soda
1 1/2 cups boiling water
Pour boiling water over the dates and soda, then let it cool.
In the meantime, mix:
2 cups sugar
1 tsp melted butter
1 beaten egg
ADD the dates and the water to the mixture.
Mix :
2 1/4 cups flour
and 1 tsp of salt
ADD to the rest.
Then add:
1 tsp vanilla
1 cup of nuts (I use walnuts)
Pour into well greased loaf pan. Let stand 20 minutes before baking.
Bake at 350 degrees 60 to 70 minutes till done. Check with toothpick
Small pan loaves work great with this, cook for 35 to 40 minutes.
Cool completely before removing from pan.
*BONUS RECIPE!* Sweet Cream Cheese Spread:
This doesn't even really count as a recipe, it's just a spread we like to make for date nut, pumpkin, and zucchini bread at my house.
Seen above smeared on the slices of date nut bread.
-1 package cream cheese
-1/3 c powdered sugar
Whip together til smooth.
Posted by Meg Luby at 3:00 AM