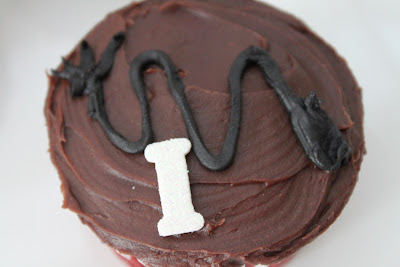 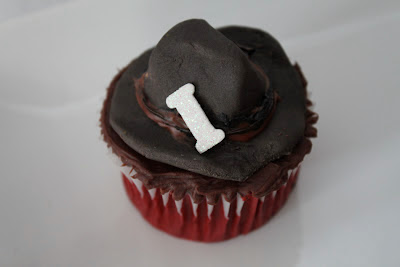 I am pretty glad that these cupcakes were some of my favorites as the letters are becoming ever daunting to post. I feel like instead of giving my blog fresh life they are just draining now. Anyone else feel that way? Suggestions on ways to stay bright and fresh?

I think my technique is going to be trying to get the letters done as QUICKLY AS POSSIBLE and also perhaps to keep posting other recipes in between letters. That is something I had been holding back on until such a time as the letters were done but I have more stuff I want to share with you guys other than these letters! Such as a 6 layer engagement cake I made and a lemon curd I whipped up from a lemon tree in California. Who cares if they don't work with the alphabet?!

...fun letters like this though remind me why I thought this was a very fun, very good idea for a blog series. I mean, who doesn't love Indiana?

God. Harrison Ford as Indiana Jones was my first crush. Next was Han Solo.

In addition to the hat and whip, I made a tribute cupcake for each movie! You can see them all lined up (in movie release order) below. 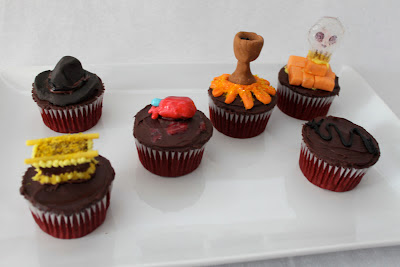 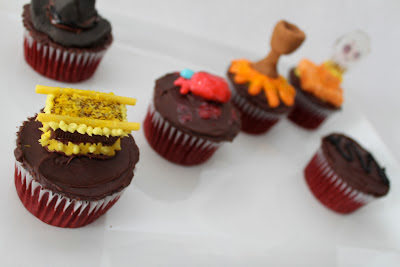 For "Raiders of the Lost Arc", the choice was simple. I had to make an Arc. 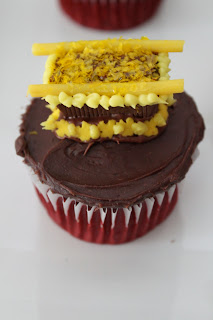 This one was made with a candy bar which I iced, used gold sparkles on, and added yellow twizzlers cut to the proper length of handles.

For temple of doom, I HAD to do a bleeding heart. This one was shaped with starbursts and looks juicy and freshly ripped from a chest because of a strawberry glaze. 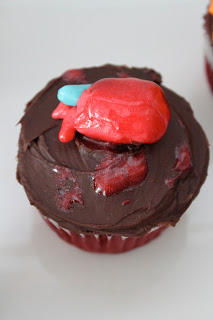 For "Last Crusades", I also had an obvious choice. The Holy Grail. This simple fondant grail appears to be sitting on a gold flame in imitation of the simple carpenter's glass that proved to be the correct choice. 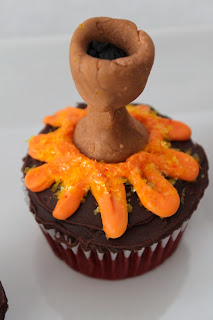 While I know many people that this is where the Indiana Jones cupcakes should STOP, I actually LIKED Crystal Skull so I felt I had to make a cupcake. This crystal skull is sitting on a pile of orange starburst bricks (meant to be somewhat South American in their lay out) and was made by melting down a clear lollipop to shape and painting the skull attributes on with food dye. 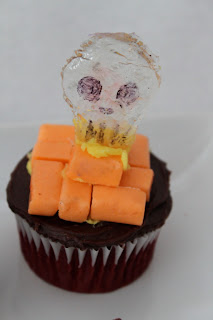 And there we have it. A full set of Indiana Jones cupcakes. 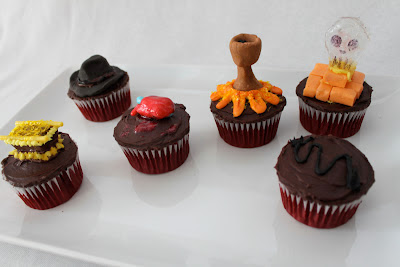 If I ever get another dog, in addition to hoping it is a sweeter, kinder, friendlier, and larger dog than the one I currently own... I really hope his name is "Indiana".

Just so I can say on loop "we named the dog Indiana" and "Indiana was the dogs name" in a really bad Sean Connery accent. 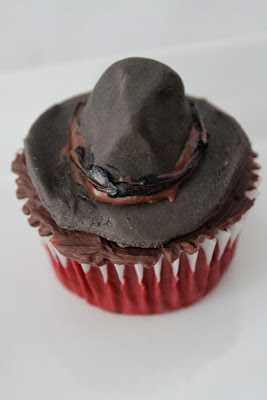 The hat was also made from fondant and icing. And the whip cupcake was just piped. 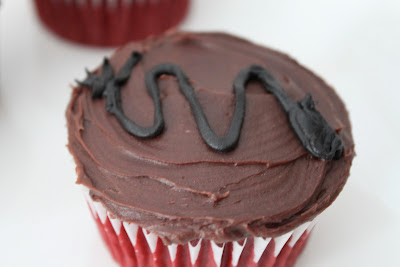 Man, these cupcakes were really fun. Maybe there is hope for me enjoying the last of these letters after all. Here's to more letters! And to going home after work tonight to Esquire, a cozy sofa, and the Indiana Jones series! It's 17 degrees here! Stay warm and cozy, you lovely blog people! :)

Til the next letter! -Meg