Hello, my loves! Happy Thanksgiving, Christmas, New Year, Valentines, and St. Patricks Day! It seems I missed a lot of joyful celebrating in the blogosphere. Including one that occurred two days ago that you may or may not have heard about: International Waffle Day. 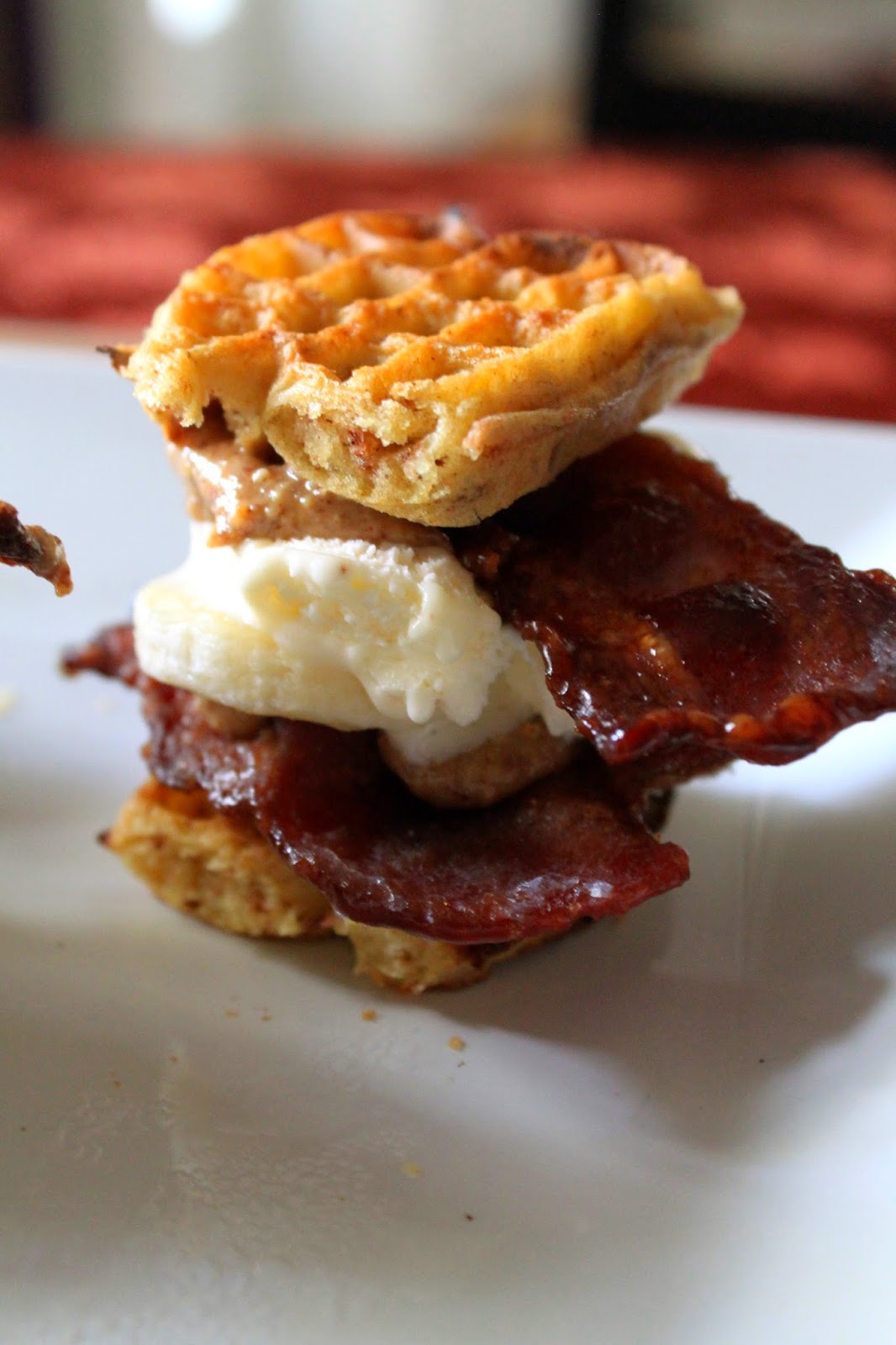 Yummm, waffles! I DID celebrate International Waffle day with waffles- I just didn't post about said waffles within the designated 24 hour period.

I figure you guys don't mind though. Waffles are good all year long. Just ask Lesley Knoppe. Unlike other foods that associate with certain holidays (such as dyed eggs or candy canes), waffles never go out of style. 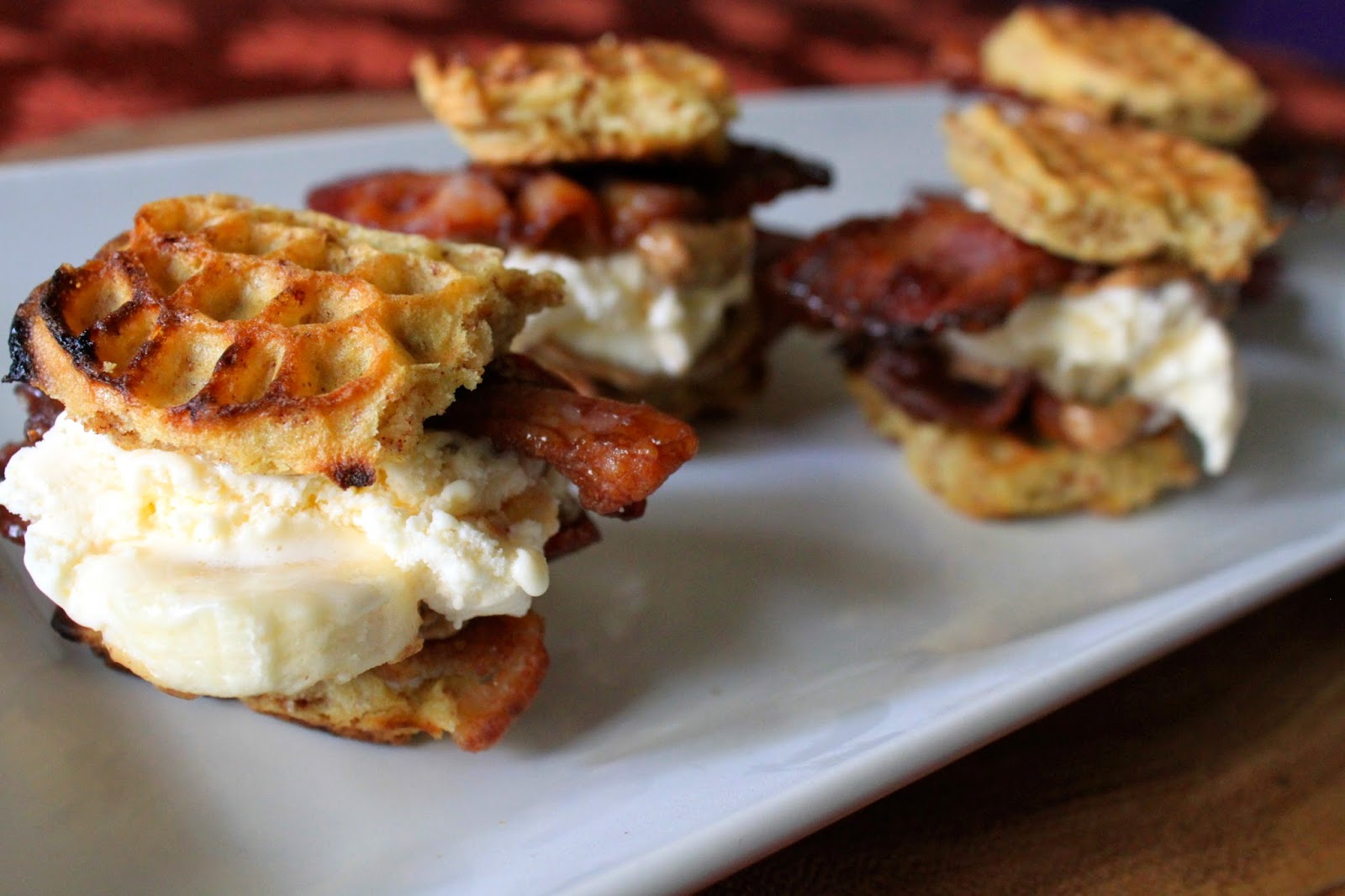 These Elvis inspired waffles in particular are extremely styling.

For those of you who don't know this about The King... the man had an eclectic palate. He was tuned into the whole bacon thing farrrrr before it became a fad. The Elvis Sandwich is famously Elvis for being comprised of peanut butter, bacon, and banana on white.

While he ate bacon in quantities that I could never imagine (such as a favorite meal called the Fool's Gold Loaf: a loaf of italian bread filled with a pound of bacon, peanut butter, and grape jelly), these mini waffle bites were manageable, decadent, and delicious. 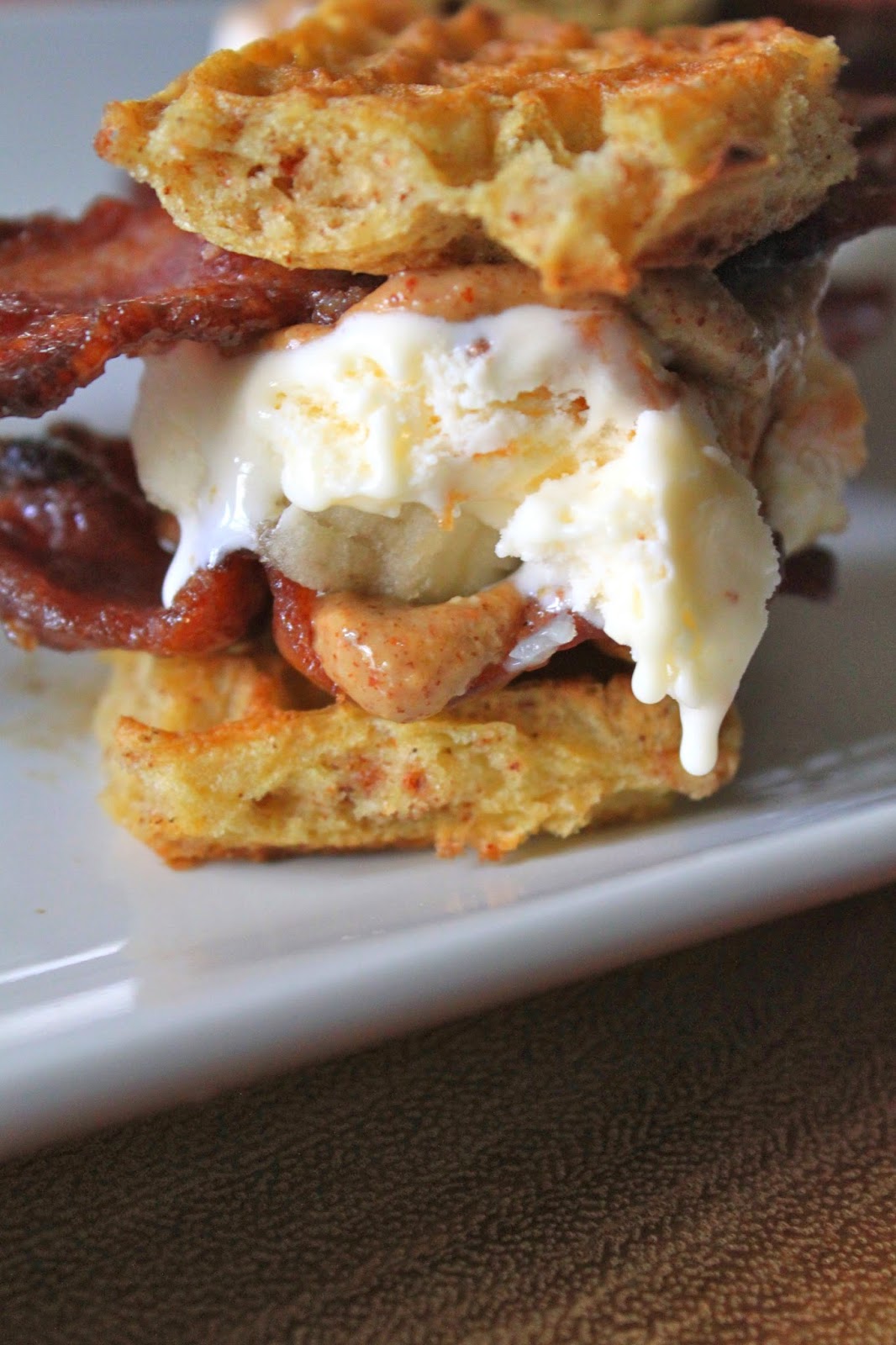 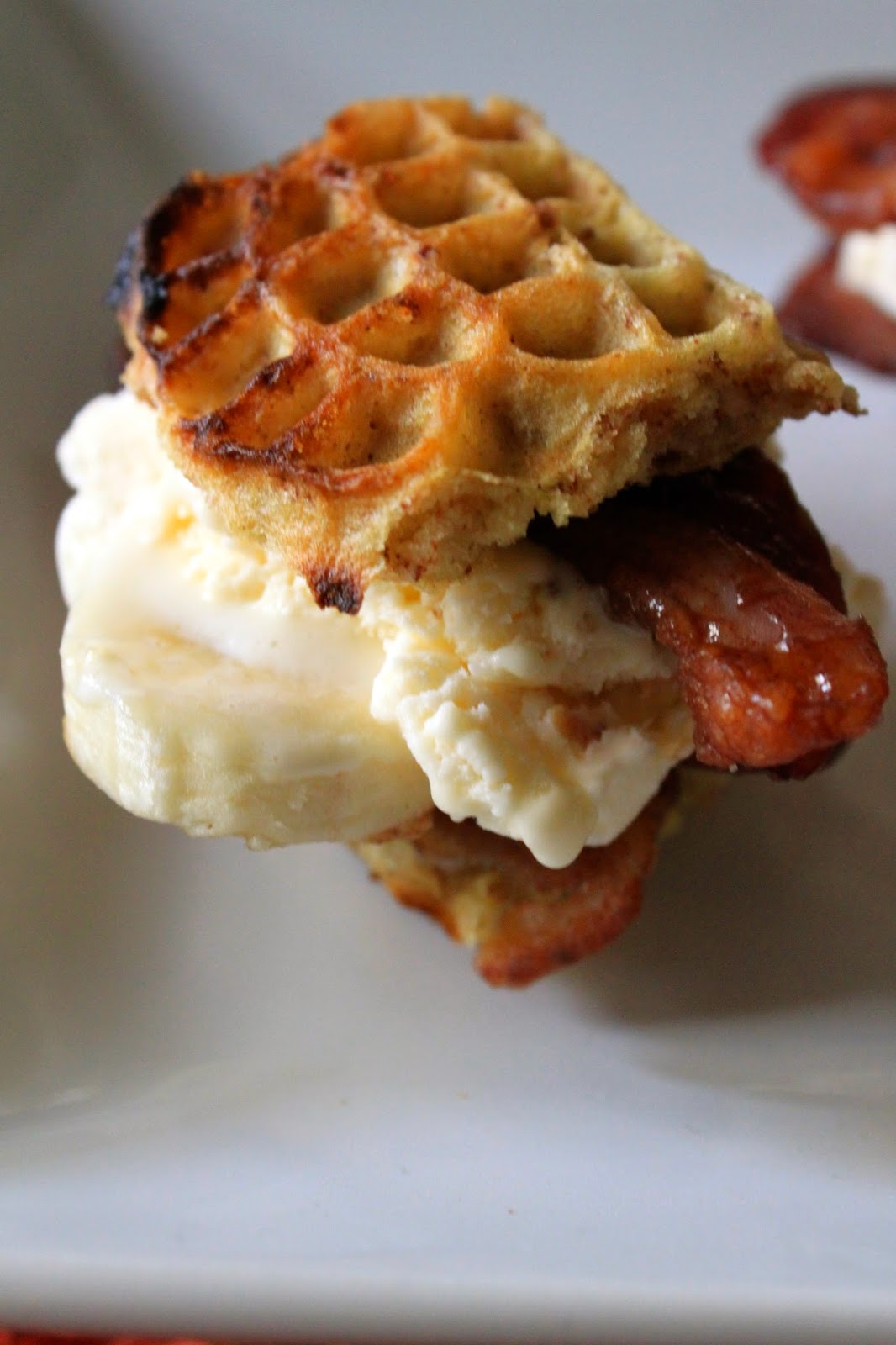 Om nom nom! Esquire and I were pleasantly surprised by how delicious these lil guys were.
While each little stack was divine, it was in large part due to the candied bacon. 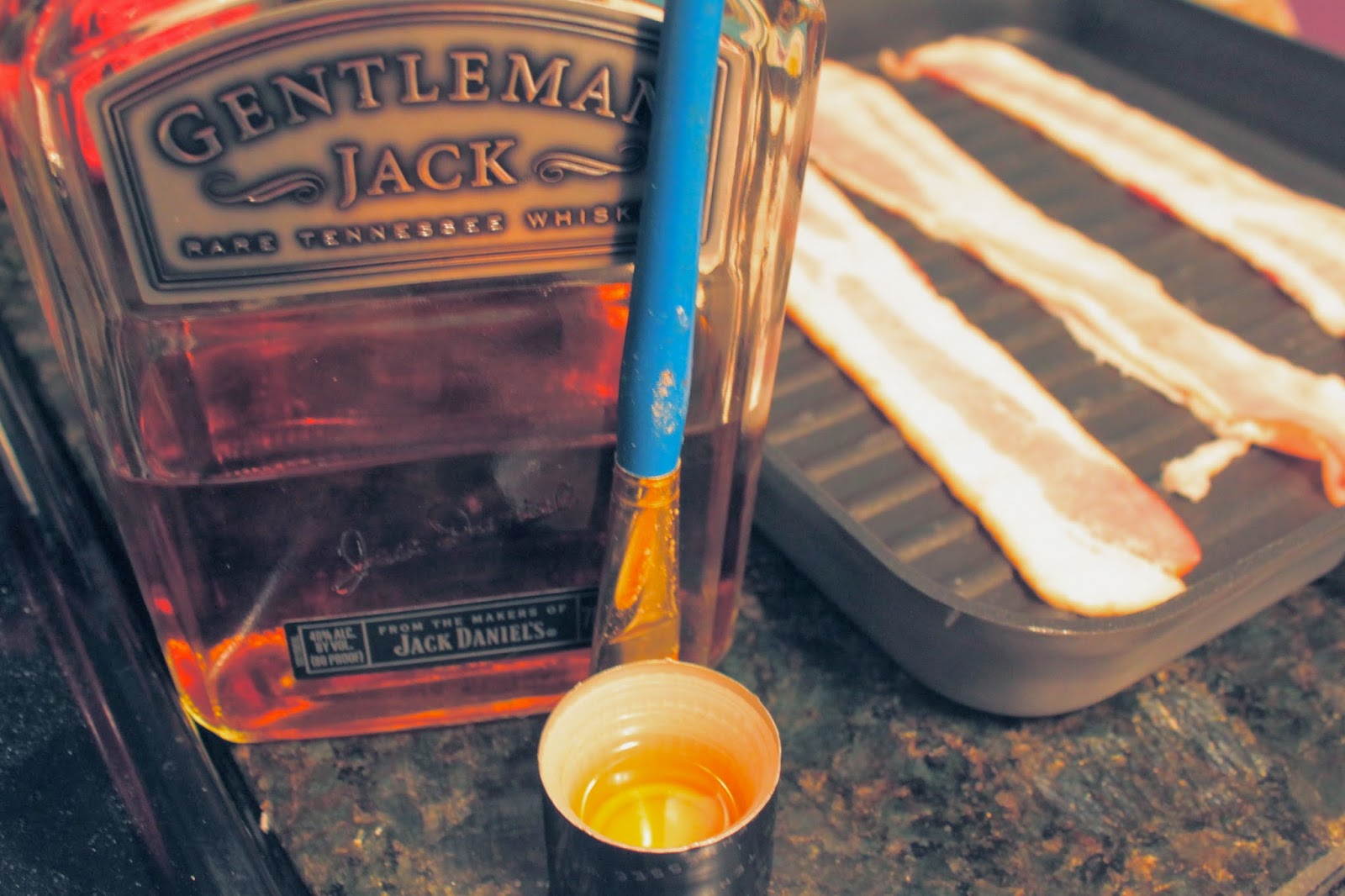 Preheat your oven to 325 degrees F.

Step one for me was to infuse our bacon with whiskey. I put all the bacon (in my case, a pounds worth) in a bowl and drizzled with some Jack Daniels (about 1/4 cup) and tossed before setting aside for 30 mins. I then laid them all flat on a cookie sheet lined in foil and brushed with a capful of the good stuff (Gentleman Jack).

Next I mixed about 1/2 cup of brown sugar with a healthy sprinkle of cinnamon. I just eyed this but I would say about 2 teaspoons worth. You can see the picture above which has my cinnamon sugar bowl. Sprinkle and coat each slice of bacon (front and back) with cinnamon sugar mixture. At this point, you have to decide if you would like to sprinkle the entire sheet of bacon with ground black pepper once they are coated. If you'd like your bacon to have that nice savory element, do so! If you are going for a dessert (as I was in this case), you can opt out of adding the black pepper.

If you are eating it plain or in salads, use the pepper. You will love it. A sprinkle over all of them at the very end. No need to flip them or use a heavy hand.

Now you have your bacon ready to bake. You're going to have to decide if you want your bacon to lie flat or crinkle up in lovely bacon waves. I wanted mine to crinkle as I liked the texture for pictures. If you want your bacon in big flat pieces, simple top your cookie sheet with another piece of foil and then another cookie sheet. The second sheet will press down and flatten the bacon while it cooks.

Bake for 20 mins! If you sneak a peek at your bacon and it doesn't look as crisp as you'd like, cook it for another 10-15 mins. Don't up the temp! Just cook it for a bit longer. When you take it out of the oven, the sugar will harden too so, keep that in mind if you just want it to crisp up a bit.

When your bacon is ready and your house smells AMAZING, take it out of the oven and let it cool for 10 mins. If you eat it too soon, you will burn your mouth.

...I know this from experience. 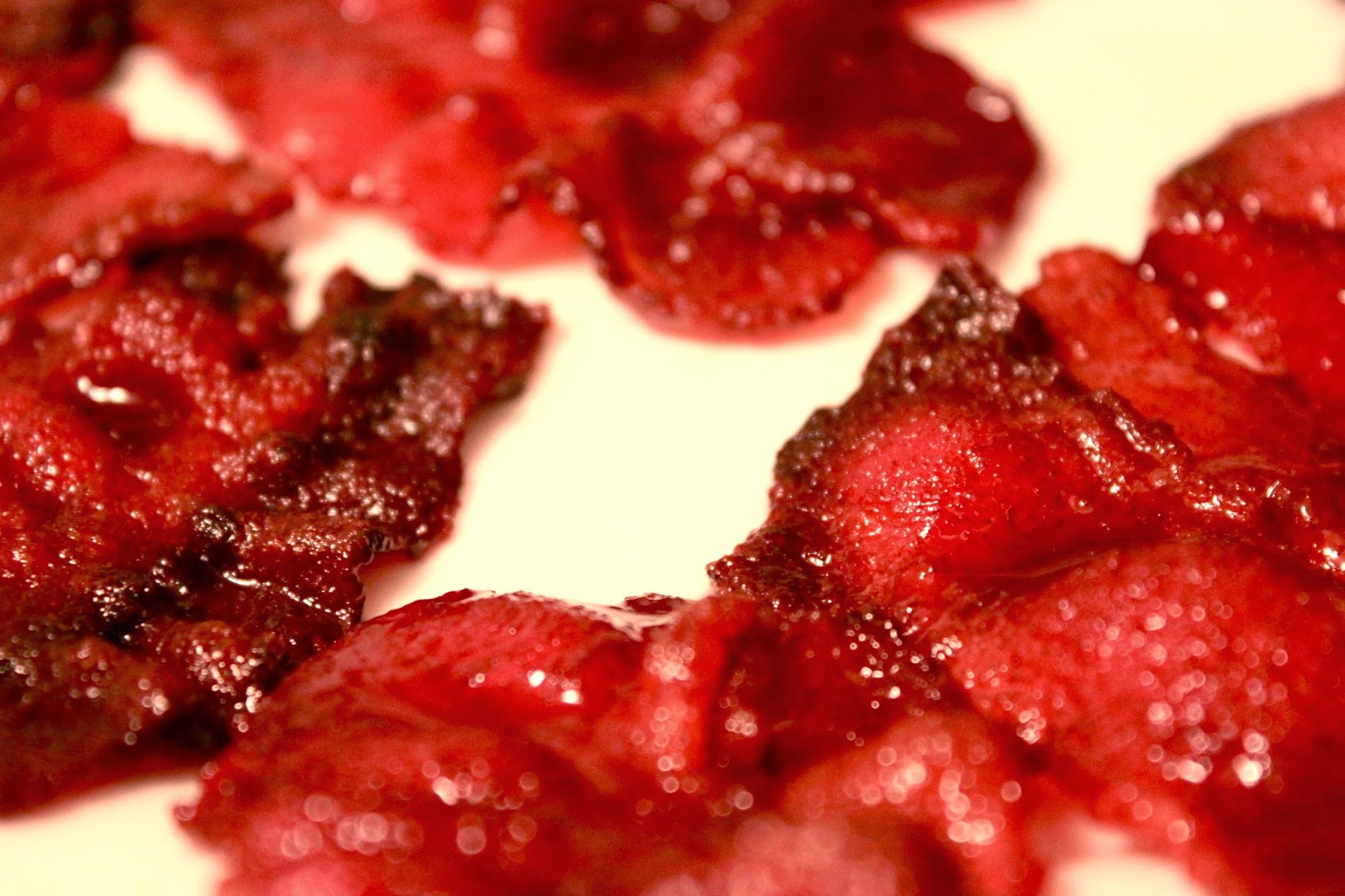 My very candied bacon, yummm. Loved the texture of this treat. We had it on our waffles and later in a salad. Won't lie to you guys, we also ate a healthy amount on its own.

Fun fact, you should have sugary bacon grease left on your foil lined pan. I threw some pecan halves into that mixture and broiled them for 2 minutes. They were great with salad but would also be welcome additions to a bowl of ice cream or, if you are STILL celebrating international waffles day, some waffles and whip cream! Buzzfeed also posted some great waffle concepts for waffle day, you should probably get your waffle makers ready for the weekend... 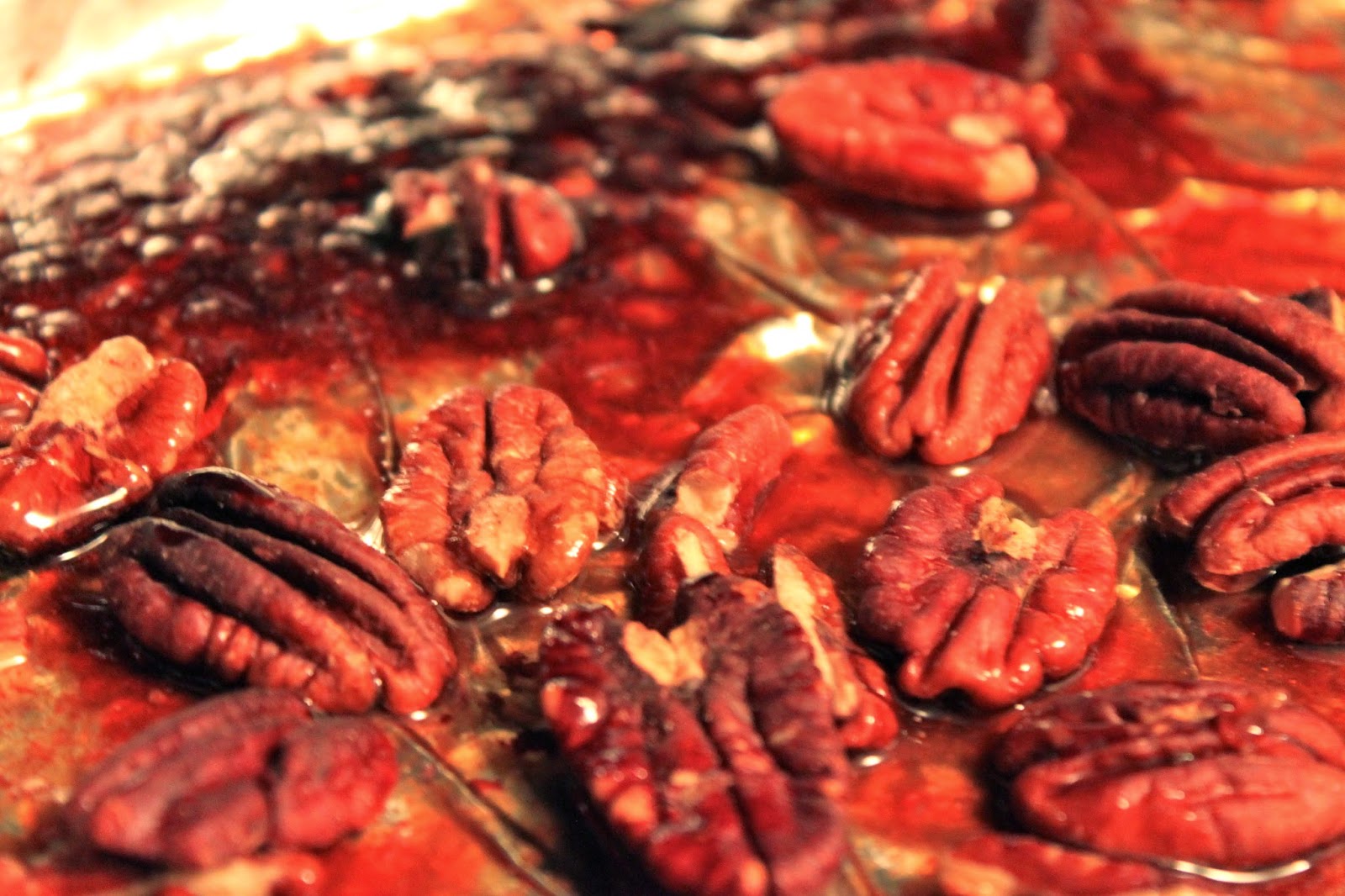 Enjoy my lovely foodies. Happy to be back. I have some exciting things coming for you this week that have been the main reason for my absence. Stay tuned...