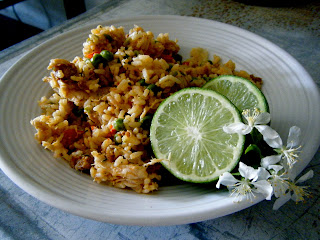 One of my all time favorite people made this Paella recipe for my family, boyfriend, and I when we were all on vacation together and, it completely blew everyone away.

I mean, there were about 10 of us, and she made a double batch, and I think there was maybe a single bowl left. And that's a LOT of Paella.
I was pretty much convinced I could never make this as well as she did. Pretty much convinced I could never make it, period. It is a lot of things cooking at once and, seemed overwhelming and scary.
But, I decided to be a brave little toaster. Even though Ms. Cougarlee has mad skillz that, I still didn't even touch on, this blog has taught me I can make and bake a lot more complex cooking then I thought I was capable of.
I mean... I'm certified disaster.
And yet! This was not a disaster. This was in fact, spectacular. I made it for my roommates and cousin to grand results. Several bowl fulls, lots of silent munching and "mmm"s. My cousin is "allergic" to shellfish so, I left them out of my batch but, if you make this recipe, I urge you to add the shrimp it calls for! I made it instead with double chicken. I'm not going to write it that way. I like the recipe with the shrimp so, I am going to write it as such.
If you don't want to put the shrimp in, then just double the chicken like I did and, I promise, it's delicious.
IT'S ALL DELICIOUS!
SO, in conclusion, Super thanks and appreciation to Ms. Emily for sending me this recipe. Her family makes it and uses this food network recipe by Rachel Ray, I adapted it as I am pretty sure she did, no mussles used, but pretty much it's the same.
Thank you for introducing me to palate paradise of Paella. (Say that five times fast).
Paella:
-3 tablespoons extra-virgin olive oil
-3 cloves garlic, crushed
-1/2 teaspoon crushed red pepper flakes
-2 cups enriched white rice
-1/4 teaspoon saffron threads
-1 bay leaf
-1 quart chicken broth or stock
-4 sprigs fresh thyme
-1 1/2 pounds chicken tenders, cut into thirds
-Salt and freshly ground black pepper
-1 red bell pepper, seeded and chopped
-1 medium onion, chopped
-3/4 pound chorizo, casing removed and sliced on an angle
-1 pound peeled and deveined large shrimp, 24 shrimp
-1 cup frozen peas
-2 lemons zested
Pick out a big, wide pan. Apparently there are such things as "Paella Pans" so if you have one, this is when you'd want to use it.  Have it preheated over medium high heat, then add 2 tablespoons extra-virgin olive oil, 2 turns of the pan, crushed garlic, red pepper flakes, add rice and saute 2 or 3 minutes. Add saffron threads, bay leaf, broth, and thyme and bring liquids to a boil over high heat. Cover the pan with lid (or foil for the lidless) and reduce heat to simmer.
In a separate nonstick skillet, over medium high heat brown chicken on both sides in 1 tablespoon extra-virgin olive oil, 1 turn of the pan. Season chicken with salt and pepper. Add peppers and onions to the pan and cook 3 minutes longer. Add chorizo to the pan (I opened mine from the casing so it was ground up and the flavors really steep into everything but, up to you) and cook 2 minutes more. Remove pan from heat.
After about 13 minutes, add shellfish to the rice pan, nesting them in cooking rice. Pour in peas, scatter lemon zest over the rice and seafood, then cover the pan again. After 5 minutes, remove cover or foil from the paella. Stir rice and seafood mixture and lift out bay and thyme stems, now bare of their leaves. I then mix everything up and then serve it as a big pot of delicious but, if that's not your scene, you can create a nice plate. Arrange cooked chicken and peppers, onions and chorizo around the pan. Serve and Enjoy :)