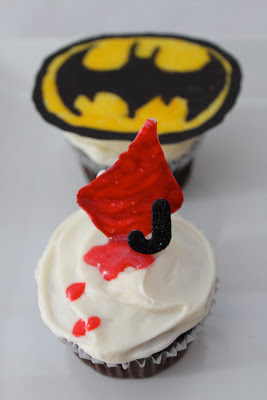 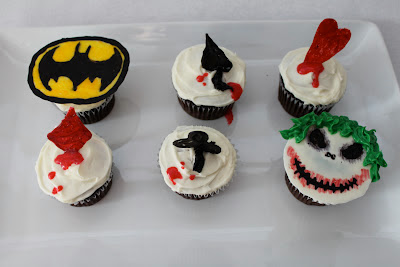 Luck of the draw of where I left off! Such dark little cupcakes to get back into the swing of things with, ha. 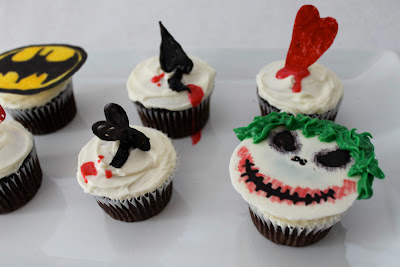 I based my loose interpretation of the Joker on Nightmare before Christmas so. He looks more like Jack than Heath... 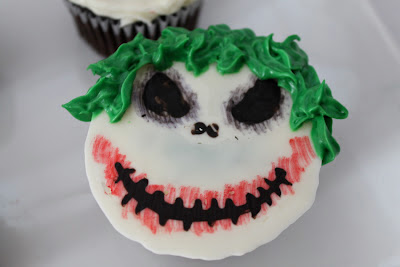 Still, his hair makes me happy! Ha, I didn't know what else to do for that iconic Joker look without going full Joker... but by going NbC instead, it turned out to be a joke. 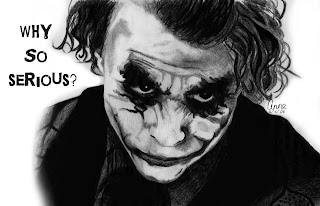 It's not crazy though, right? Looks vaguely "Jack" like from afar? I think it kind of works at least.... 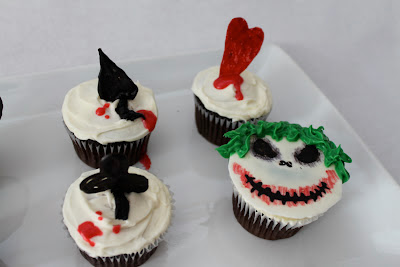 If nothing else, we have some very violent cards in play. Because, that's what Joker's calling card is. Love the final scene of Batman Begins-"...taste for the theatrics, like you. Leaves a calling card..."

So very, very dark and creepy. Love it. The logistics of the cupcakes was simple. I piped dark chocolate for the black card suits and stems and then piped white for the Joker/Jack round face and the red card suits. I then painted them with icing and stabbed them into cupcakes with their bases. To create the melted stem affect and melted bloody look was a simple icing drip. I made up a simple red icing, watered it down, and then loosely piped and dripped onto the cupcakes for the violent look.

Joker's hari was also piped on, his face painted with icings. The Batman logo was piped dark chocolate filled in with a white chocolate background I later painted with bright yellow icing. 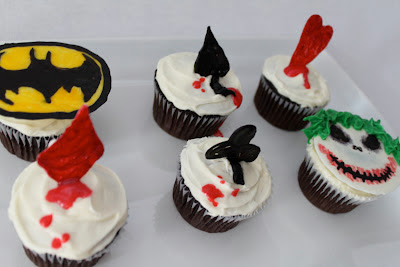 Makes it pop against the others I think :)

Again to all, thank you so much for always reading. Happy August! Will try to continue to post periodically and get back into my very behind reading of some of your blogs too!