Back from the beyond! And by "beyond" I mean, trips home and to California! 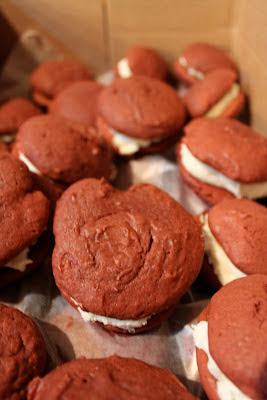 Good to see you too!
Once upon a time, it was the holiday season and I made a frack ton of holiday cookies for my house's holiday party and then for my dear friend, Sean's holiday party. Including these amazing amazing whoopie pies that got raved over, devoured, and were never seen again.

Yep. I made over 100 pies and I forgot to take a picture of them or any of the cookies I made. Which was over 500 cookies/pies. My arms and mind were weak from making dough, that's my only excuse for my neglect to properly document what was a gargantuan effort on my part. I realized that and tried to make do with the few I had and planned to give to the neighbors but, it was a no dice situation, no matter how festively plated, which is why you didn't see these until now: 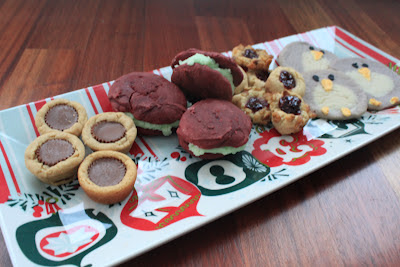 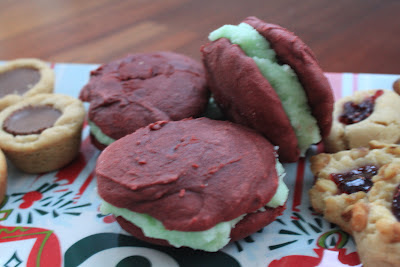 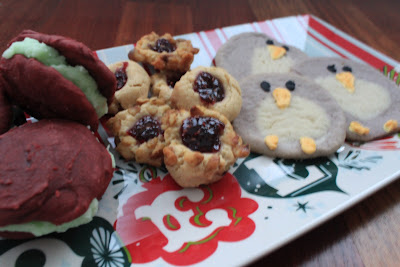 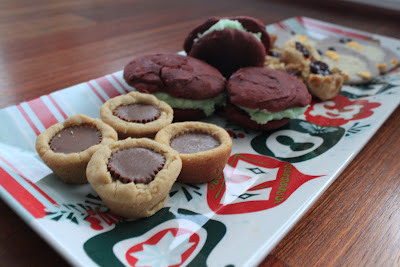 An almost pretty Christmas plate of cookies you might be thinking! Agreed. I decided not to share them at the time because of that almost, vowing that the next time I made the whoopie pies I would 1) make less than 100 because, wow, effort and 2) take proper photographs in a proper setting with proper lighting. 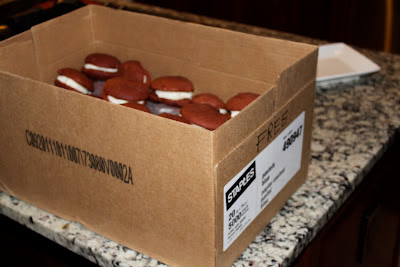 Above you can see a printer paper box, on my kitchen counter, in evening lighting filled with 104 red velvet whoopie pies.

I clearly know how to make my goals happen. 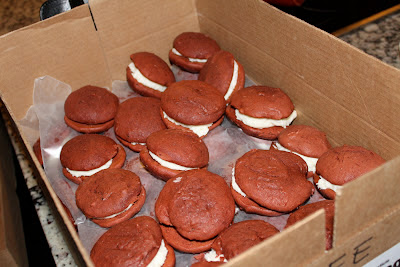 My friend Sean has these awesome parties and, for his birthday, I offered to make desserts for his fiesta. I was between trips (California/Chicago) and asked how many people were coming and how many pies to make.

Ha, so, thinking people may or may not eat more than 1 (someone at the party confessed to eating 8, have I mentioned again how delicious these things are?) I multiplied the recipe by four and ended up with 106 whoopie pies. 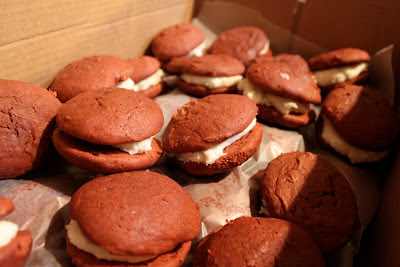 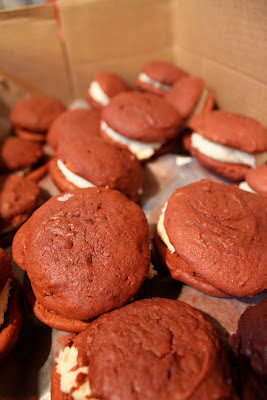 For those of you paying attention, there were 106 but, the box is only full of 104 because my roommate and I had to taste test. 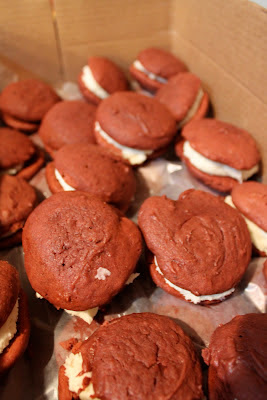 I really, totally, spent the whole day making these pies and ended up forgetting until the last moment to take ANY photos and at that point I was so late, I didn't even have time to take them out of the box. These pictures are all cringe worthy but, daggum it, I am tired of holding out for something better. This is as good as it's going to get, folks! Please take my word on it and make these pies!! They are awesome and people borderline worship me when I bring them to parties. 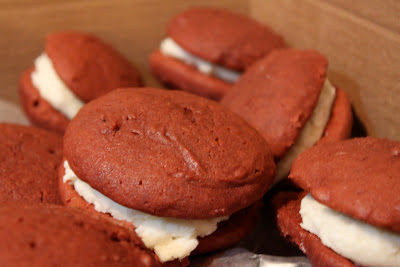 Whoopies first! Preheat oven to 350 and line your baking sheets with parchment paper. Whisk: flour, cocoa powder, baking powder/soda, and salt in med bowl. In a separate bowl/mixer, beat together butter, shortening, and both sugars on low until fluffy/smooth. Add eggs one at a time, beating well after each egg. Add vanilla and red dye until just blended.
Add half of the flour mixture and half of the butter milk to the batter and beat on low until combined. Add remaining flour mix/buttermilk until completely combined.

Using a spoon (or a small ice cream scoop/cookie scoop which is what I used), drop a tablespoon of batter onto the baking sheets and repeat (keep them 2 inches apart!). Bake each sheet for 10 mins each. Remove sheets from oven and let them cool at least 5 minutes before transferring them to a cooling rack.

Let the whoopies cool completely before adding the filling.

To assemble: spread the filling onto the flat side of one cake using a knife or by piping the filing onto the cakes. Top with another cake, flat side down. Repeat until you have sandwiched whoopies entirely completed! (I wish I had piped them, instead (both times) I had spread which was semi difficult. With 100 pie sworth of filling though, it made more sense. When I make less, I am piping...) 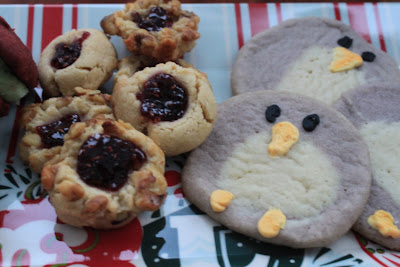 I know you saw those penguin cookies and thought "how cute!" 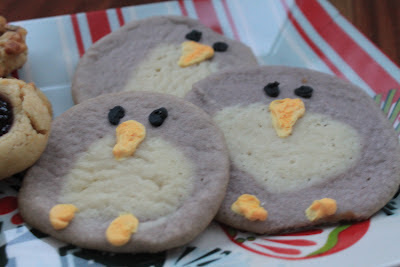 The other holiday cookies on the tray I have posted about here but, penguins! Those are new. I wish I had some better pictures but, since I don't, I'll just let you know quickly how to make them. 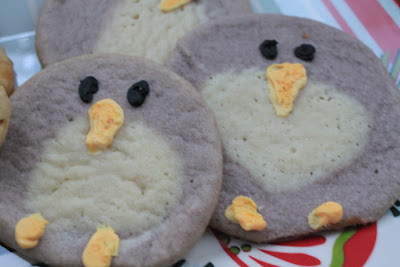 Divide sugar cookie dough (homemade or store bought) into two. One half form into a tube/roll and set aside. The other, dye lilac (or blue or black, penguin colors) and then roll flat/to length of the set aside tube/roll. Wrap the un-dyed dough roll in the purple dough. Slice into 1/4 inch discs. Lay on cookie sheet, tada! Penguins. Bake and be amazed at the cute lil tummies. Pipe on beaks, feet, and eyes so people don't think you are crazy when you say your white and purple blobs are penguins.