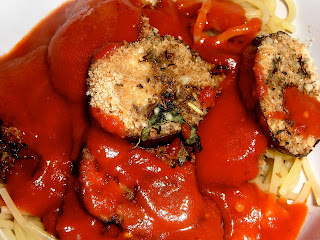 ...this dish was just. Really good.
It was one of those times when, I had a lazy afternoon of studying and, got hungry. Decided to throw some pasta together using the produce in my fridge that was nearing toss time.
And it exceeded my expectations. By delicious miles. 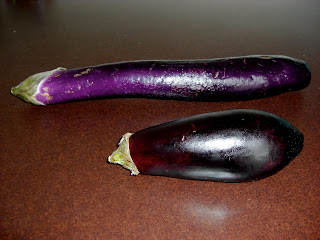 For those of you who don't know, these are both egg plant. The cute little one is aptly named "baby eggplant". I don't know how they grew these fully flavored egg plants in miniature size but, it was so cute I could not resist. And that long, funky looking one, I just have never had nor seen before and therefore needed to try.
This one is called "japanese eggplant".
So! I decided to make something with eggplant in it just so I could try these two out. I'd had egg plant before and cooked it before but, I decided to go into the experimental, no recipe, territory.
Turned out fun and yummy as I said. One of my new favorite ways to add to the classic spaghetti and tomato sauce. 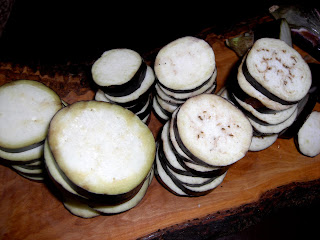 These are the two eggplants chopped up! The left side is the baby eggplant (which ironically, look bigger) and the right side has the japanese, which seemed to have more seeds and a slightly more bitter flavor.
When everything was cooked up though, the playing field seemed to level and it was just one pasta bowl of delicious.
Baked Eggplant Pasta
-1 to 2 Eggplants (depending on size/amount of people you are trying to feed)
-1 cup bread crumbs
-Basil
-Garlic Salt
-Oregano
-Pepper
-Parmesan
-Olive oil
Slice the eggplant into discs. Drizzle a lipped cookie sheet with olive oil and smear, (essentially, grease the sheet with olive oil). Lay the sliced discs out on the sheet and drizzle with oil. Sprinkle each disc with bread crumbs, I used a pretty heavy hand. Then add spices and cheese to taste. I used a good amount of garlic salt and then went lighter on everything else.
Bake at 350 for 20-30 minutes or until the breadcrumbs appear toasted and the eggplant discs are soft. Depending on how thick you slice, it could take more or less time.
Posted by Meg Luby at 10:41 AM