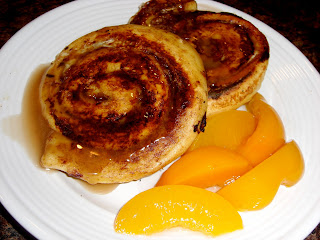 It was late and my roommates and I were hungry and, for some reason, the perfect late night snack sounded like the idea that had been rumbling around my head for a while lately.

Cinnamon Roll French Toast. Yummm.
It hit the spot very nicely and as we all settled back into the Olympic games, it was the perfect treat. Hopefully you find similar results. I feel like it can only be more amazing to wake up to then it was to end the night with.
Cinnamon Roll French Toast
-1 package raw jumbo cinnamon rolls
-2 eggs
-2 Tablespoons milk
Take cinnamon rolls out of package, instead of setting on cookie sheet as directed, flatten them so they are more like 1 inch thick discs instead of 2.5 inch biscuts. Bake 8 to 10 minutes, so they are just baked, just under golden. Let cool 10 minutes. Put pan/butter on burner on low. Whisk eggs and milk in bowl. Dip and smoosh cooled flat rolls in egg mixture and then cook on stovetop as you would ordinary french toast. Should crisp up nicely but stay stay soft on center.
Delicious :)